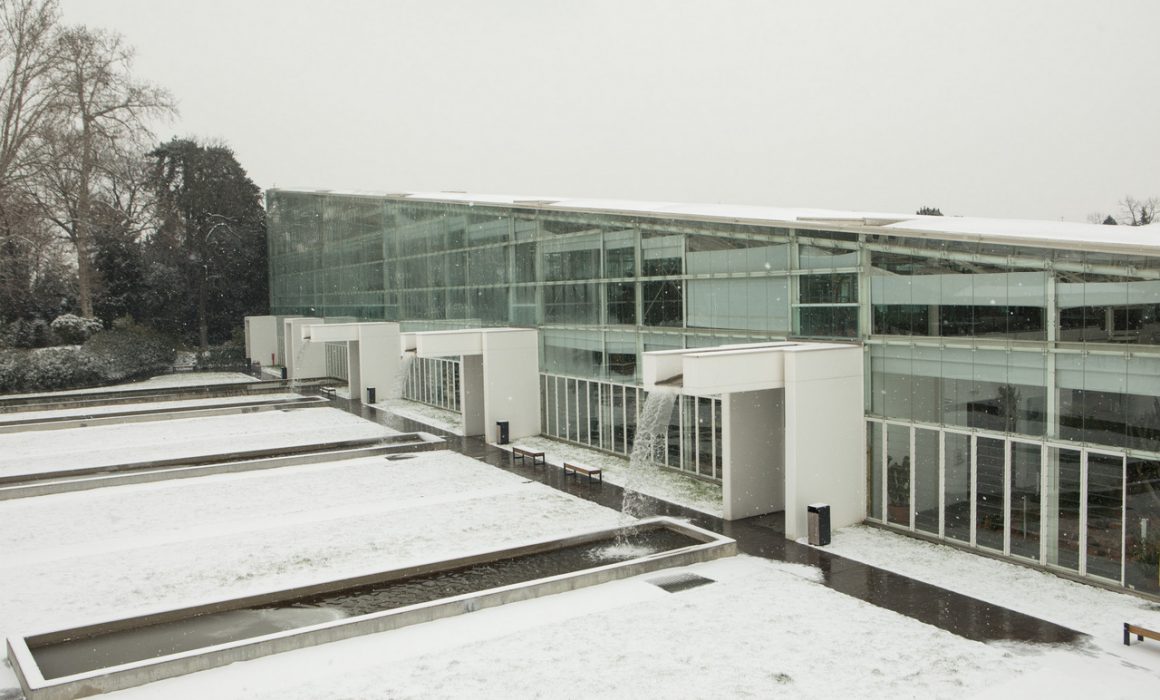 I was invited  to explain the project for the Botanical Garden of Padua  and show the achievement.

We introduce an architectural and intellectual project plenty of history, innovation, charm and pathos.

We are in Padua in the middle of Venetian area and nearby Venice. We find ourselves in the mainland, just in the west areas of the ancient Venice Republic.  In 1222 one of the first and most important world university arose. Later in 1399 the scientific study and medical science would be also developed. 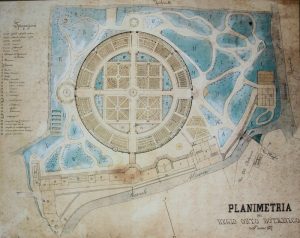 In 2005 by the University of Padua it was published an International Competition for the Restoration and extension of the Botanical Garden.

The international competition: a prestigious victory.

The most important requirement to achieve the competition has been the following:
A development project with an urban system “measured”, to enhance and respect the existing urban fabric and history. Urban interpretation and architectural representation and choices for restoration of the old Hortus Cintus and for nineteenth-century greenhouses.
For new greenhouses the idea of telling about biodiversity with the five major biotypes of flora and its architectural interpretation. The whole project respects all needed requirements. The architecture is not self-representative but represents the idea itself.
Client which announce and lead the competition and whose aim was to realize the project. The planning project from the competition announcement to its fullfillment without any smudging.

The IDEA: the botanic living museum. The five fundamental biotypes.

The collection and tutorial vision of the main biotypes that make up the earth in other words the collection through geographical parallels, from the equator to the pole, the main plant structures that compose it.
Topics:
The geography and the range from the equator to the pole, from the pole to the equator
Temperature: from hot to cold; from cold to hot
The spatial dimension: the vastness of extension and height of species vs opposite characteristics
Light: high level vs low level of light.

HORTUS CINTUS and the Goethe greenhouse

The centre where arise and develop the Botanic Garden site, property of Padua University and protect by Unesco, is the HORTUS CINTUS. It has been set up in 1545 for the cultivation of medicinal plants. At that time, were called “semplici” (simples): medicaments which resulted directly from nature. HORTUS was located in the countryside and cause to uncommon inner vegetables and extraction of expensive medicaments, a lot of overnight robbery occurred, although serious penalties were expected (fines, prison, banishment). A round wall was built to avoid robberies of which names as “hortus sphaericus, hortus cinctus and hortus conclusus.

Later HORTUS CINTUS was decorated with sculptures and water basins (the site is plenty of wellhead water) which were restored during the 2005-2014 works campaign.

In the nineteenth century were joined the so called “Nineteenth century greenhouses” to shelter the exotic plants. The project restoration (the restoration works are not started yet) underline the virtuous circle, which today will be called bio-ecological and we decided to show this. “Nineteenth century greenhouses” are a trio of large rooms joined by central doors with marble decorations. The garden overlooking facade is provided of biggest glass wall that can be opened to ventilate the greenhouses. The three rooms bearing wall, in the north side, separate the greenhouses of a unique longest and quite narrow secondary opening on two different levels. Each of the three rooms has at the ground level some nozzles which conduct hot air of the three fireplaces, fed by wooded waste of garden maintenance, placed on the lower secondary opening, located behind of the greenhouses and which also serve as “ harvest container” of wooded waste ready to burn.

The architectural project of new greenhouses is the representation of idea of a man which linger to admire the diversity of creation and conceive an observation an preservation criterion, from the most extensive and lush to the more hidden and amazing and vice versa.

Do you remember the telescope that Galileo Galilei (1609) invented in Padua when he was teaching at the university? The architecture is configured as a telescope that extends from the top of the largest biotype, small and contained.

The research laboratories and the archive of rare species close the series of biotypes.

It was virtually possible to think of the architectural volumes as modules representatives of the biotypes. The volumes, in progressive sequence, are connected as the wagons of a train; the separation of these is constituted by diaphragms; with openings that need to be acted by the visitor. The diaphragms guarantee the biotype with its specific habitat (temperature, light, humidity, etc.). The largest (requiring considerable heights) to the smallest (and low).

The representation of a telescope … as if an individual with a telescope from the equator would look at the pole or vice versa.

Architecture interprets the IDEA, in a non-self-representative way, with the building (volumes, plant, finishes) and the setting (set design, lighting, layout, teaching) that underlies the entire museum operation of the new, botanic, living museum.

WATER. In the nineteenth century there was the presence of an artificial small lake then buried. In the project we didn’t consider it. We decide to recall the idea of water and of the lake with waterfalls because they are the good place for the life as the waterlilies.

ARCHITECTURE AND INNOVATION: the new materials.

The project could forecast to use only new products result of the scientific research and new model for building contruction.

1. ETFE-Ethylene tetrafluoroethylene copolymer on the roof

The ETFE, also known by its acronym ETFE, is a thermoplastic fluoropolymer. It was originally designed to have high corrosion resistance in a wide temperature range.
Compared to glass, ETFE weighs about 1%, transmits more light and is also resilient, self-cleaning and recyclable.
An application example is how the material pneumatic panels covering impressive sports facilities, such as the Allianz Arena or the Beijing National Aquatics Centre – the largest structure in the world to use ETFE films, also known as “Water Cube” and the Eden project in Cornwall- England.

Efte 100% recyclable, call for minimal energy during transportation and installation, making a significant contribution towards green construction.
Ethylene tetrafluoroethylene (ETFE) a fluorine-based plastic. It was designed to have high corrosion resistance and strength over a wide temperature range. ETFE is a polymer and its source-based name is poly (ethene-co-tetrafluoroethene). ETFE has a relatively high melting temperature, excellent chemical, electrical and high-energy radiation resistance properties. When burned, ETFE releases hydrofluoric acid. 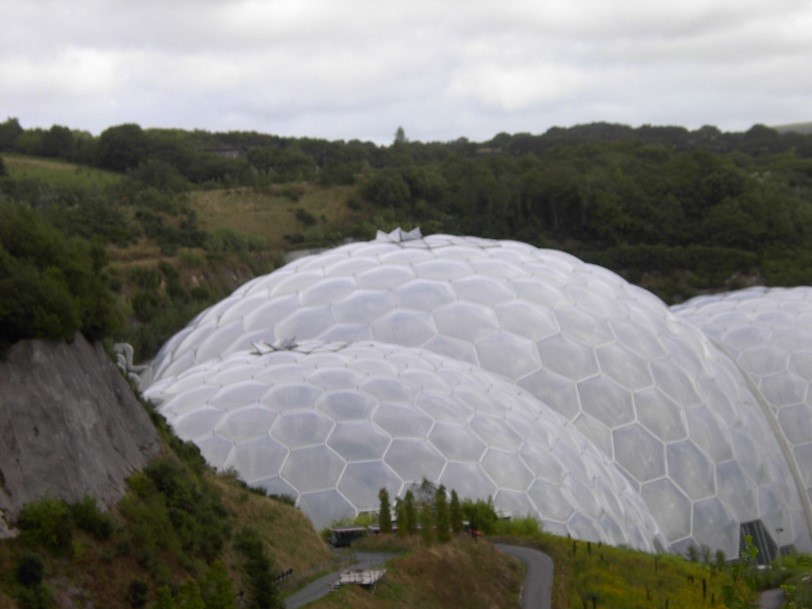 Considering the large quantity of humidity inside the Botanic Garden for the outside and inside plaster has been used a patented special material with a photocatalytic active ingredient for concrete materials. Those are able of destroying organic and inorganic pollutants we can find on air and in the same time preserve over time the aesthetic quality of products.

The building has been designed to reduce the environmental impact to a minimum- a100m log 18 high showcase in which the shape, layout of the space and istallations have been optimised to exploit to the full natural energy available free from the sun. The building plays an active role in transforming both the inside and outside environment, thanks to design and technological features which reduce environmental impact. Natural precipitation feeds a 450 m3 collecting pool. The same body of water which marks the entrance to the Biodiversity Garden also ensures constant mixing and oxygenation of the water reservoir. From a depth of 284 m, an artesian well takes up water at a constant 24° C allowing tropical acquatic plants to live all year round…electricity produced by photovoltaic panels powers the pumps regulating the water cycle and contributes to operation of the entire ouse system… see more to www.ortobotanicopd.it